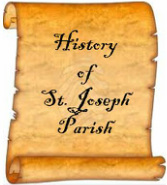 In 1891, Archbishop John Ryan sanctioned and authorized the Sunday celebration of Holy Mass in Spring City and Royersford. Rev. Thomas Quinn, then pastor of St. Mary of the Assumption, Phoenixville, determined the time and place. The first Mass was said in the home of Mrs. Francis Sherry on Pikeland Avenue in Spring City. The Spring City Sun reported “There were over 50 adults present besides a large number of young people. It is proposed to hold services once a month…”

In July of 1916, Rev. Michael Collins, then pastor of St. Mary of the Assumption, was commissioned by Archbishop Prendergast of Philadelphia to obtain property in Spring City. On August 16, 1916 a newly acquired church was blessed and dedicated to St. Joseph. The first Mass was celebrated by Rev. James Gavin. It remained a mission under St. Mary of the Assumption until April 6, 1919 when Rev. Charles L. McCarron was appointed the first pastor of the Twin-boroughs (Spring City & Royersford). With financial help from his family, he was able to buy a home at 256 New Street in Spring City, which he later turned over to the Archdiocese of Philadelphia.

In the late 1960’s, Rev. Joseph E. Fitzpatrick saw the need for a larger and newer church for Spring City. With a loan from the diocese, he purchased a large track of land on Route 724, the current location of the church. The enthusiasm from the parishioners was great, and the new church of St. Joseph was dedicated in spring of 1968.

St. Joseph Parish has a wonderful legacy garnered from the rich background of religious leadership the parish has been fortunate to experience over the past decades.

ADORATION OF THE BLESSED SACRAMENT
DAILY Adoration 8 am – 7 pm

STATIONS OF THE CROSS
FRIDAYS in Lent 7:00 pm

Although the public celebration of Mass has reopened to
the faithful throughout the five-county
Archdiocese of Philadelphia,
all who are unable to return at this time
are invited to take part virtually via a live streamed broadcast.

You can also Live Stream Mass from